Technation: How The Link App is shaking up the legal sector

As a former contestant on BBC’s The Apprentice, Manchester-based solicitor turned technology startup founder Lauren Riley has become a familiar name and face within the city’s thriving digital and tech ecosystem.

Startups: Who is Lauren Riley?

A qualified solicitor, former Apprentice contestant and app founder, Riley will be speaking at Startups and Virgin Media Business’ Power of Digital event

Congratulations is due to Lauren Riley, founder and CEO of Manchester-based legal tech firm, The Link App…

Lauren Riley, a former contestant on The Apprentice, has turned to a crowdfunding site scale up her legal app.

The Manchester solicitor and former Apprentice contestant has raised £160k through crowdfunding for a new app for the legal sector.

Legal tech startup The Link App has embarked on a six-figure crowdfunding campaign. The Manchester-based company is attempting to raise just over £300k through funding platform Seedrs, as it looks to drive efficiency and innovation in the way law firms communicate with clients.

The Brief talks to Lauren Riley

The Brief catches up with the former Apprentice star, Solicitor & entrepreneur Lauren Riley.

Solicitors Journal – An alliance of robot and lawyer

A new app launched by Apprentice star Lauren Riley is looking to shakeup the North West’s legal sector after expanding into Manchester.

As she gears up to run the London Marathon to raise money for the domestic violence charity Women’s Aid, The Apprentice star Lauren Riley tells us why this is her latest challenge… Read more.

The Young Empire: ALTHOUGH SHE didn’t win the 2014 series of The Apprentice, Lauren Riley has found another path to business success. In the same year, the qualified family solicitor launched The Link App, which gives lawyers a secure way to communicate with their clients. The 29-year-old, who lasted until week seven on the hit BBC 1 show, designed the “time-saving communication tool” for her notoriously relentless profession. Read more.

The Telegraph: Do you remember last year’s Apprentice candidates? Here’s what they’re up to now.

Solicitor Lauren Riley was the 11th candidate to be fired, and was another controversial character, who got embroiled in many arguments. She performed well in many of the tasks though, and now owns her own app – The Link App. It’s marketed as a ‘revolutionary new way for lawyers to connect with their clients’. Read more.

Interview with Lauren Riley, former candidate from BBC’s The Apprentice

Former The Apprentice candidate Lauren Riley was on the receiving end of a stern ‘You’re Fired’ from Sir Alan Sugar, but that hasn’t stopped her successfully launching a new mobile phone app to aid communication between lawyers and their clients. Lauren told Jane Common at Today’s Conveyancer why her brainchild – the Link App – will save conveyancing solicitors time and money and should, most definitely, be hired!.. Read more

Family solicitor turned tech entrepreneur, Lauren Riley spoke to Bdaily’s associate editor,
Ellen Forster, about her problem-solving app, her time on BBC’s The Apprentice and her
plans for the future…Read more

Where is the diversity in law recruitment?

Hi, I’m Lauren Riley, you may have read about me before as I was lucky enough to have been named as a WATC inspirational woman in 2014. I am a lawyer, business owner, public speaker, blogger and a former BBC Apprentice candidate.

Apprentice star lives up to her TV promise

Lauren Riley, from BBC’s The Apprentice in 2014, launches The Link App – a business communications tool. Article by The Blackpool Gazette
Read more

Lauren Riley on tech, lawyers and The Link App

We spoke recently to Lauren Riley about her just launched Link App. Here, she tells us what it’s all
about, what she took away from her time on The Apprentice, and the things she thinks you need to
do to succeed in whichever field you may choose.
Read more

Entrepreneur Of The Week – Lauren Riley

Lauren Riley, selected as Entrepreneur of the Week
Read more 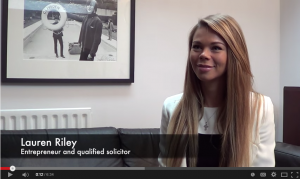 The legal profession is largely adopting mobile technology. Article by Raconteur.net.
The Link App is in beta-testing for release in June.
Read more

Lauren’s interview for lawcareers.net, discusses transferable
skills, life as a lawyer and how her legal background has helped
her in the world of business, and setting up The Link App…
Read More

From The apprentice to one of a kind St Albans

It’s not hard to see why St Albans might be the perfect fit for
aspiring entrepreneurs….Read More

Lauren Riley (Law, 2006, Lonsdale) answers questions about life at
Lancaster and tells of her experience on the BBC series ‘The Apprentice’
in 2014… Read More

With his Marmite approach, Lord Sugar may have missed an opportunity
with The Apprentice contestant Lauren Riley when he uttered the infamous,
‘You’re fired’ in last year’s show… Read More

The Voice: The Apprentice star and solicitor
is determined to give the law industry a modern
facelift

SOLICITOR AND former BBC Apprentice contestant Lauren Riley is a force
to be reckoned with. Beautiful, successful and poised, it is no surprise
that she intimidates many… Read More

With an increased entrepreneurial spirit driving growth in the
legal industry, John van der Luit-Drummond wonders who
the real innovators are and if they will succeed in implementing
real change to the profession… Read More

Lose weight, find a new job, drink less, go to the gym more…they’re all
the standard resolutions made year in, year out…
Read More

From the boardroom to the red carpet! Apprentice
star Lauren Riley parties in London

SHE may have been fired by Sir Alan Sugar a few weeks ago, but The
Apprentice’s Lauren Riley looked far from bothered as she stepped out
in London last night… Read More

She may have been fired by Lord Sugar on week seven of The Apprentice,
but that hasn’t stopped Lauren Riley from pursuing her business dreams…
Read More

The former apprentice contestant discusses proving her business concept,
raising finance and why her app will revolutionise the way law firms…
Read More

We caught up with the beautiful Lauren Riley, who you might know from
The Apprentice, to talk all things fashion, her business… Read More

Keen to dispel the image of a stuffy solicitor, 29-year-old Lauren Riley is anything
but. Recently strutting her stuff on BBC1’s The Apprentice … Read More

Solicitor entrepreneur Lauren Riley has described how she has met venture capitalists
and tech companies interested in her legal app after appearing in the BBC1 show The
Apprentice…. Read More

The Apprentice contestant Lauren Riley discusses The Link App,which is designed
to facilitate  the relationship  between  solicitor and client … Read More

This year I was lucky enough to be chosen as one of Lord Sugar’s 20 possible
apprentices. However, the stress of sitting in his board room …  Read More

We have some exciting articles lined up for next week too. Keep checking the blog or follow @misslaurenriley on twitter for updates.

Keep sharing to every one…